The truth about large cap funds: Part I

“This article was originally published in Forbes India”

Many mutual funds who called themselves large cap funds and compared their performance against large cap indices – like the Nifty 50, BSE 100, BSE 200, could buy stocks outside the gamut of large caps as well.

“Details of your incompetence do not interest me,” the famous fictional character Miranda Priestly says in ‘The Devil wears Prada’. In real life I suppose, details of incompetence do matter. Allow me to illustrate.

Mutual funds, as we all know, have recently been recategorised. Let us talk about the large cap category today.

All this while, many mutual funds who called themselves large cap funds and compared their performance against large cap indices – like the Nifty 50, BSE 100, BSE 200,  could buy stocks outside the gamut of large caps as well.

The fund manager’s perspective would have been – “One cannot hug the benchmark and hope to beat the benchmark.”

The capital markets regulator has now said, “Fair enough, you can buy 20 percent outside the Top 100 stocks by market capitalisation and still call yourself a large cap fund, and continue to charge management fees for Active Fund Management”. What active fund management means is, the fund manager may choose whether he wants to take all the stocks in the index or some of them and in what percentages. Also, for that (supposed) superior judgement, he can charge a substantially higher asset management fee, charged to the Net asset value (NAV).

The passive fund management style is where one just tracks the index. It is a lazy style and should charge a significantly smaller asset management fee.

The regulator has clarified that if a fund is above 90 percent in top 100 stocks, it will be labelled as an index fund. One would think, after being categorised as an index fund, it would not be necessary to reinvent the wheel and tweak the percentage allocations but there are some funds who try to do that as well, charge active management fee and then underperform as we shall see.

Let us examine a clear set of large cap funds. 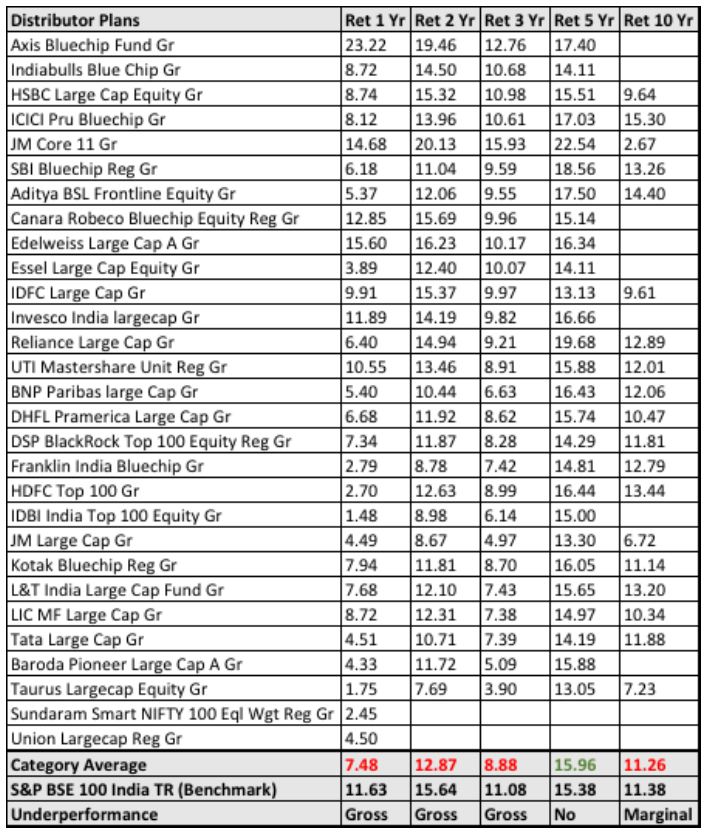 Actively managed large cap funds, as a category, have not beaten the benchmark at all. A few who have, have not done so consistently.

And finally, there is Woody Allen who says, “One must have one’s delusions to live. If you look at life too honestly and clearly, life becomes unbearable.”

Stay tuned for Part II, to know how the plot thickens.

The author is the Founder of ABANWILL CONSULTANTS LLP, a firm that was formed to provide independent views on investing and make an impact in the field of Financial Services.